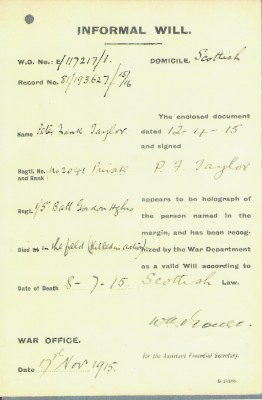 Informal wills are wills which do not satisfy the formal requirements of execution under section 8 of the Wills Act, 1936.  For information as to the legal requirements to create a valid and binding will see our article ‘Proper Execution and Witnessing of Will is Vital‘.

Requirements for a Valid Will

In South Australia, a will or other testamentary document (such as a codicil) will not be considered valid unless:

Court has Power to Admit Informal Wills to Probate

There are however, circumstances in which the Supreme Court will hold a will valid, notwithstanding that it does not comply with the formal requirements of execution under the Act.   The Court has the power to admit an informal will to probate if it is satisfied that:

In short, the Court needs to be satisfied that the deceased intended the document to dispose of their property and that they intended such disposal to take effect only upon their death.  A document does not have to be expressed, on its’ face, to be a will.

Indicators that Document Intended as Will

Indicators that a document may have been intended to be a person’s last will include:

However, such indicators alone will not be enough to satisfy the Court that an informal will should be admitted to probate.  The Court will also examine other evidence to determine whether the deceased intended the document to be their final will.   In addition to the terms of the document itself, this may include evidence of conversations the deceased had with other persons around the time the document was made, the manner in which the document was created, where the document was found and any knowledge the deceased may have had about the formal requirements for making a will.

There have been cases in Australia where informal wills such as entries in a patient’s hospital records, suicide notes, post-it notes, iPhone notes, computer files, audio recordings, a half burnt hand written will and DVD recordings have been admitted to probate.  However, this is by no means a simple exercise.  An application to admit an informal will to probate is invariably far more complicated, time consuming and expensive than a standard application.   Generally such grants of probate must be made in solemn form and require a significant amount of evidence including often, forensic evidence.   If a family member or loved one has left what you believe may be an informal will, it is imperative that you take expert legal advice as soon as possible.

Such complications are of course easily avoided through the making of a well drafted valid will.